This word has a very broad  meaning. It is an atmosphere of comfort, peace, and acceptance, and it is what Oktoberfest is all about.

from the Alpine VIllage Center we found this delightful glossary of words and phrases to enjoy our Havre de Grace’s 3rd annual OKTOBERFEST, Oct 14, 2017 from noon – 7pm  and the 5th Annual American Legion OKTOBERFEST same day from 9am – 3pm! Of course, here at Bahoukas Beer MuZeum we have the perfect collectibles to bring a little Oktoberfest home. Here’s a link to all the October Events in Havre de Grace.

If you want to carry your very own beer stein to the Oktoberfest, visit us at Bahoukas Beer MuZeum…. we have a pretty nice selection to choose from…

But we don’t stop here with Brewmania, check out these advertising mirrors, lamp, and signs. 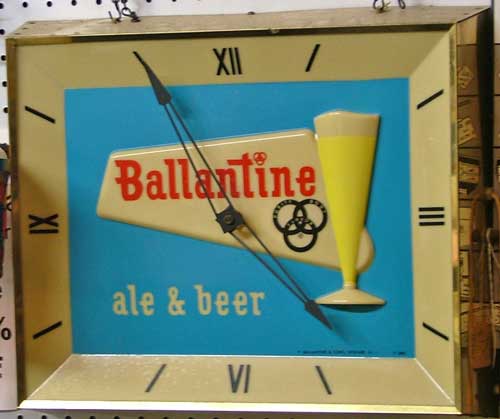 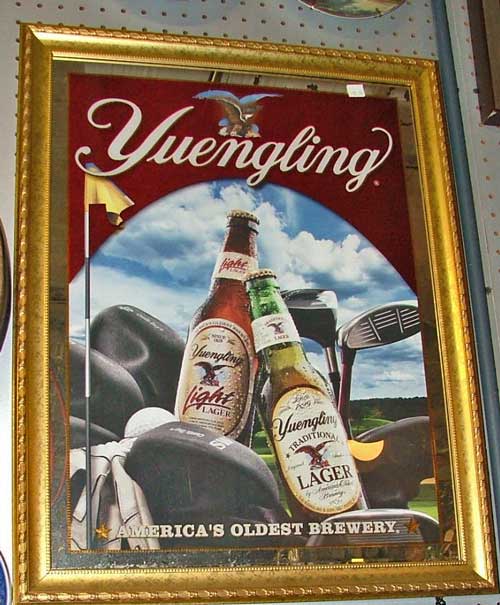 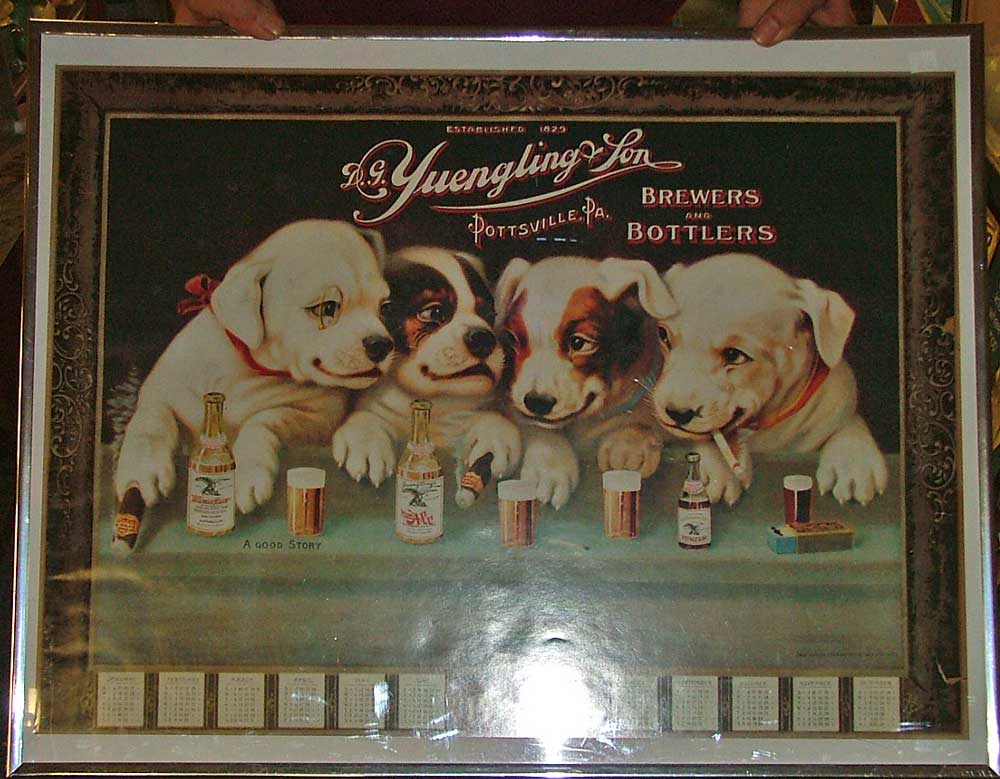 reproduction of 1907 Yuengling calendar with puppies 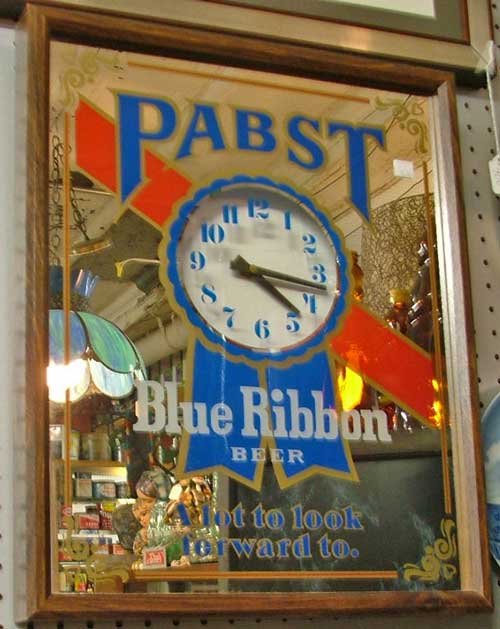 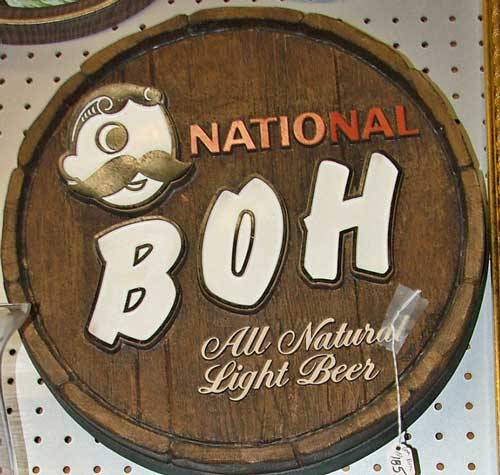 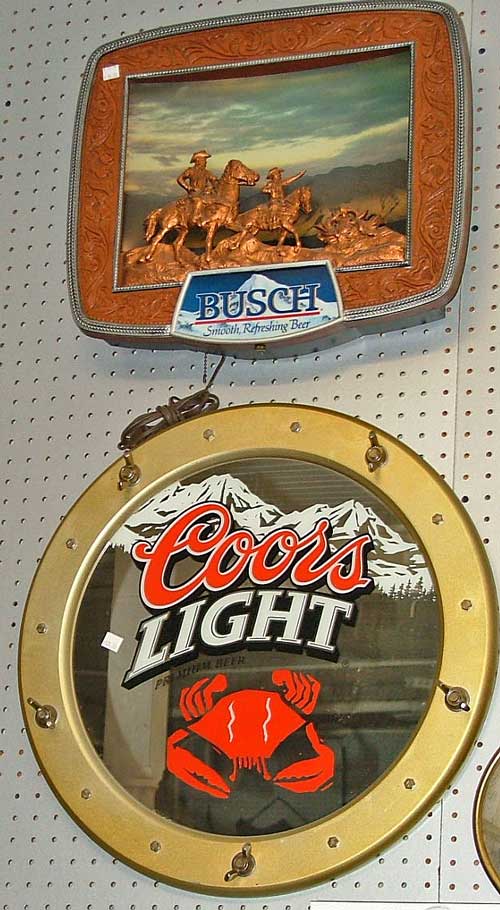 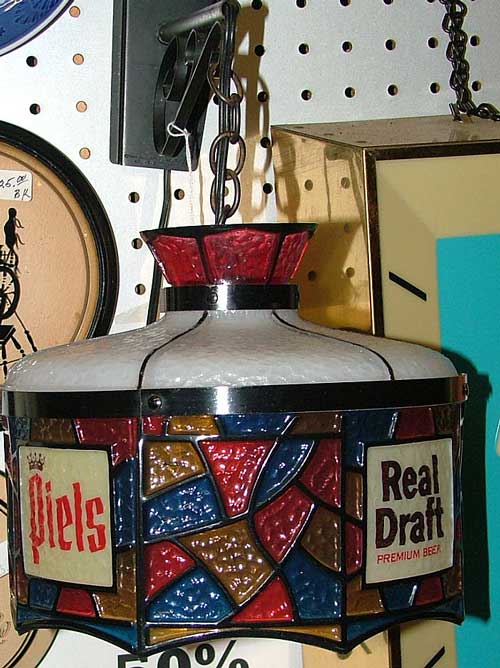 Again, Bahoukas Beer MuZeum offers some fine pieces for you brewmania collection or to add to your Oktoberfest celebrations! We leave you with this phrase from the Alpine Village site!

Stop in today, we’ll be watchin’ for ya!

How Do Your Children Save Money?

Do Kids Still Use a Toy Bank to Save Coins?

Reproductions available at Bahoukas Antiques include the dentist by Stephens, the skeleton – not sure, the black guy is a J&E Steven and the black girl is by John Harper. Original mechanical, cast iron banks were manufactured in the 1800s and created to encourage children to save their money. These banks are frequently referred to as ‘penny banks.’

The golden age of American cast iron banks lasted from 1869 to 1910. There are two types of these banks — still and mechanical. Still banks are primarily repositories and usually take the form of an animal or human figure with a coin slot. Mechanical banks have moving parts and springs and a sequence of movements can be triggered either by simply depositing a coin or more commonly by depositing a coin and pulling a lever.   from Tribstar.com

A turning point in the company’s development came in 1869 with the production of their first cast-iron mechanical bank. This bank, featuring a monkey that popped out of building, inspired numerous competitors to produce similar products and helped create a new genre of product that blended art and function in ways that sparked the imagination and ingenuity of designers. In fact, between 1869 and 1890, the J & E Stevens Company produced more than 300 different models of mechanical banks.    from Connecticut History

WWI created a need for the iron to support the war efforts, essentially ending the company. But the 1920s brought renewed interest in the cast-iron mechanical banks.

Toy collecting, which became popular in the 1920s, exploded in the post-war era thanks to increases in spendable income. Today, original cast-iron banks and toys from the J & E Stevens Company sell for thousands of dollars. The enduring value of these products is a testament to the quality and ingenuity that helped make Connecticut the nation’s leading toy producer for much of the 19th century.   from Connecticut History

Along with unique cast-iron mechanical banks, we also have a wonderful selection of other banks for saving those coins. Start a great habit for your children and start them early. Stop by and browse our selection at Bahoukas Antique Mall. We’ll be watchin’ for ya! 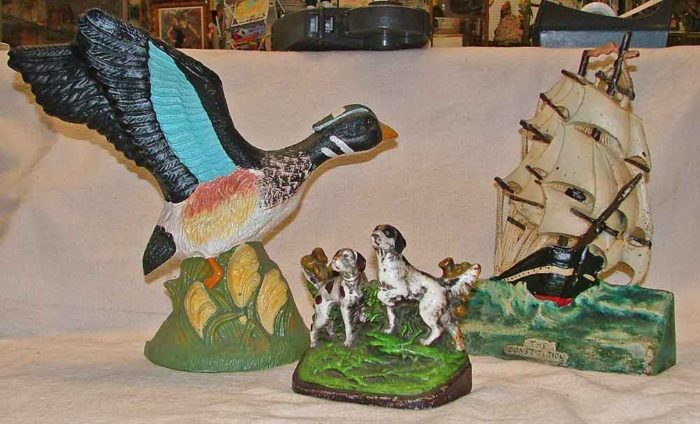 Have you seen IT?

We cannot help sharing our CLOWNS! 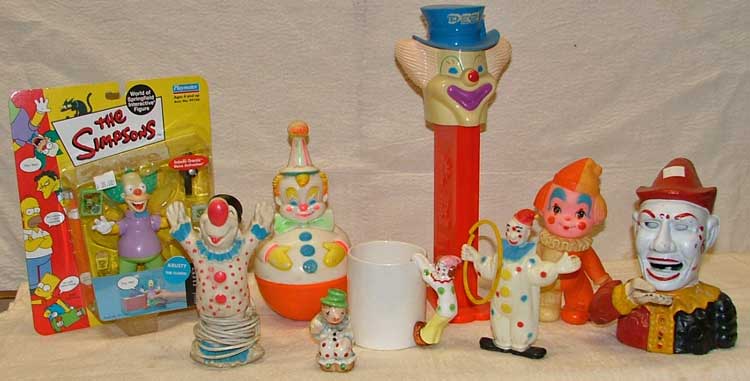 According to Box Office: IT is the highest grossing horror movie of all time. Of course, Pennywise the Clown is not exactly one’s best buddy. But we thought that if you liked the movie, you just might love our clowns in general!

Our clowns are definitely less scary and lots more fun.

Above you have Krusty the Clown from The Simpsons, a clown nightlight (1966), Roly Poly Clown – 1960 and musical, clown salt shaker, plastic cup with a clown handle, Peter Pez – a giant PEZ dispenser that holds and dispenses full PEZ packs, plastic clown figure with hoop, a sqeak toy clown, and a wonderful cast-iron mechanical bank clown.

Krusty is often portrayed as a cynical, burnt-out, addiction-riddled smoker who is made miserable by show business but continues on anyway. He has become one of the most common characters outside of the main Simpson family and has been the focus of several episodes, most of which also spotlight Bart.       From Wikipedia

In the photo below, we have another assortment of wonderful clowns. In front, the stuffed clown dolls are quiet smiley with the one on the left a collectible Knickerbocker stuffed clown. On the back shelf left to right are: 1950s tin, battery operated Violin Clown; Czechoslovakian blown glass clowns; and a 1962 Squeaky the Clown pull toy by Fisher Price. When you pull him along, the head bobs up and down and he squeaks. 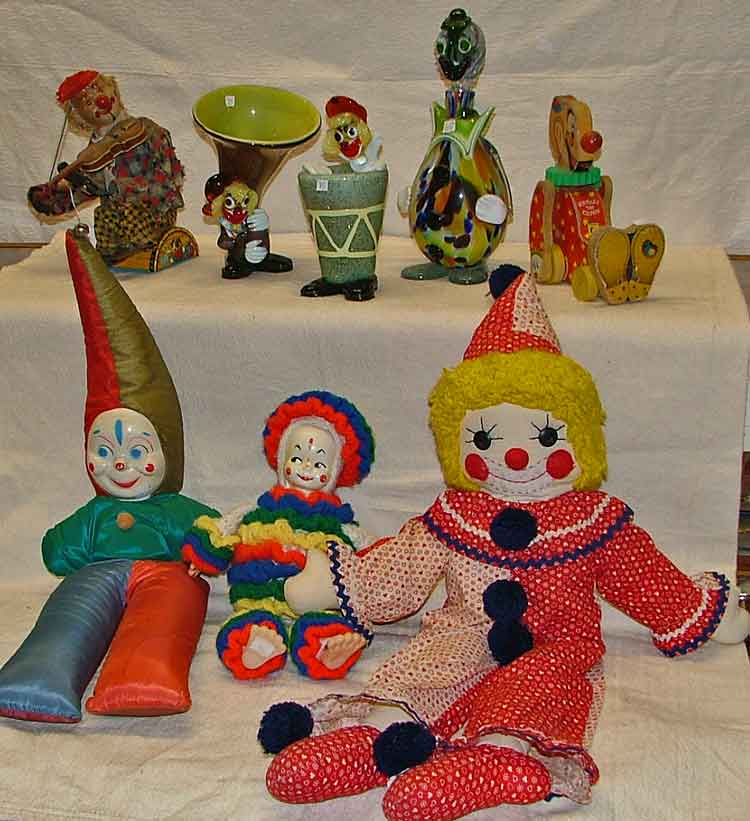 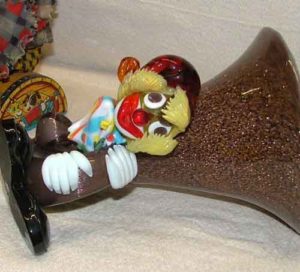 Here’s a close up detail of the clown figure that’s on two of the Czechoslovakian, blown-glass, pieces.

You guessed it. We just couldn’t resist sharing the wonderful, collectible, variety of clowns available at Bahoukas Antique Mall to help celebrate the most popular horror movie, IT, based on the book IT by Stephen King. Stop in and have some fun!

#12 – Hubley Farm Tractor – for the collector or the kid

This Hubley Farm Tractor is in excellent condition as is the original box. It’s very collectible. But any child would also enjoy this. Made in Lancaster, PA. Stop in to see it and so much more at Bahoukas Antique Mall and Beer MuZeum in Havre de Grace, MD