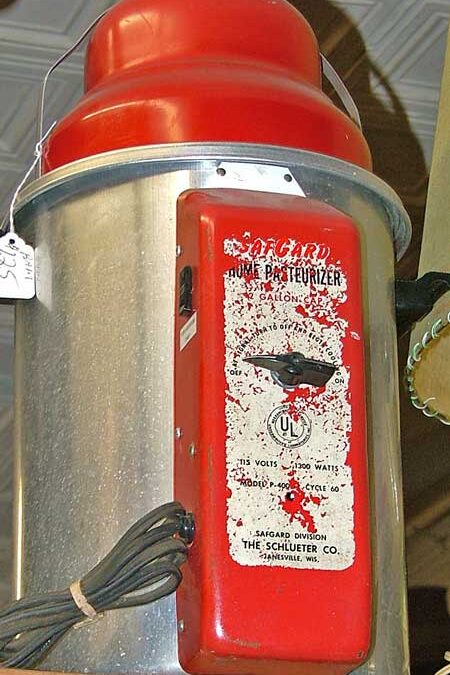 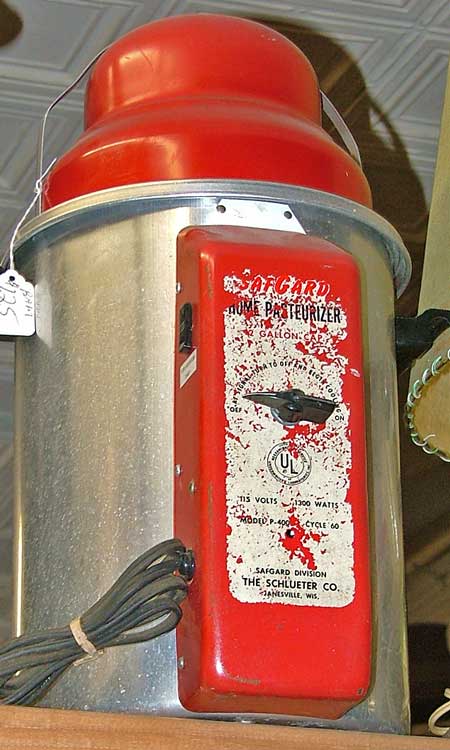 Always tell us what you’re looking for…

You just never know what might be discovered when you’re searching our shelves. High up on one of those shelves, we discovered a Home Pasteurizer by The Schlueter Co. of Wisconsin. Used for pasteurizing raw milk, we’ve discovered that they still make these.

… If you traveled through even fairly large cities around the year 1900, you would often come across something now illegal in most urban areas: milk cows. Dairy animals were not uncommon in cities, and it was often the task of young children to lead the animals to whatever grassy areas were available on the edge of town so they could graze.

In the last hundred years of urban migration, the number of home or small farm dairies has been greatly reduced. Who needed to keep a cow when it was so much simpler just to buy milk from the grocery store? As the population of rural areas emptied into urban centers, Americans became more and more disconnected from the source of all their dairy products… as well as more concerned about the quality of those products as dairies became enormous commercialized enterprises.

from Self Reliant School

The above quote is from an article that gives the many sides of the raw vs pasteurized vs homogenized milk. If you’re one of those folks who take self-reliance and personal responsibility very seriously, we have a tool you might need.

We also found this information from Mother Earth News website:

…It’s actually very easy to pasteurize your own milk on the stovetop. An added bonus is that your milk won’t need to stand up to long distance shipping and prolonged storage, so you can pasteurize it safely using lower heat and less time than many industrial milk producers use. All you need is a stainless steel pot and a simple kitchen thermometer.

So there you have it: the tool or the recipe!

Of course, we keep telling you about all the surprises waiting for you to discover at Bahoukas Antique Mall and Beer MuZeum. You can be sure, we’ll be watchin’ for ya. Stop in soon!