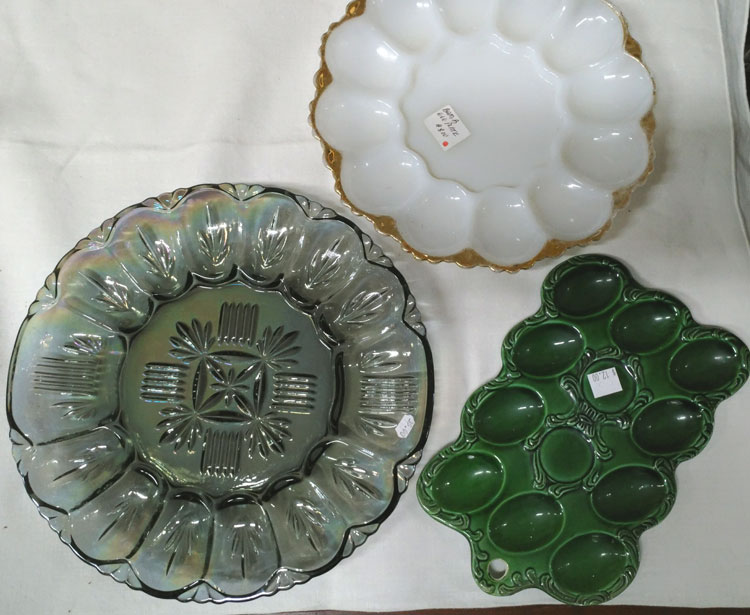 … from Roman Days to Southern Tradition

Serving deviled eggs at picnics and cocktail parties may have been de rigueur in post-World War II America, but these classic creamy concoctions did not originate in the United States. Although they weren’t prepared the same way, the roots of modern-day deviled eggs can be traced back to ancient Rome, where eggs were boiled, seasoned with spicy sauces and then typically served at the beginning of a meal—as a first course known as gustatio—for wealthy patricians.

We have a nice variety of egg plates to serve those delicious deviled eggs after they’re all discovered from their hiding places on Easter Sunday. Knowing that the deviled egg goes back to Roman Days, you’ll be proud to serve this wonderful tradition on these gorgeous plates.

By the 13th century…

… stuffed eggs began to appear in Andalusia, in what is now Spain. An anonymous cookbook from this time period instructs the reader to pound boiled egg yolks with cilantro, onion juice, pepper and coriander and then beat them with murri (a sauce made of fermented barley or fish), oil and salt. After stuffing the mixture into the hollowed egg whites, the two halves were then fastened together with a small stick and peppered.

But history is one thing. How we love deviled eggs and the beautiful plates we serve them on… well, that’s another thing!

No other Southern food, not barbecue, not fried chicken, elevates the dish upon which it is served.
But the deviled egg does.

According to OurState.com – Since 2000 Fiesta Ware has introduced egg plates…

We invite you to stop in and see what we have in our collection. Make your deviled eggs the ‘talk of the party’ when you present your favorite deviled egg recipe on a beautiful plate. We’ll be watchin’ for ya!