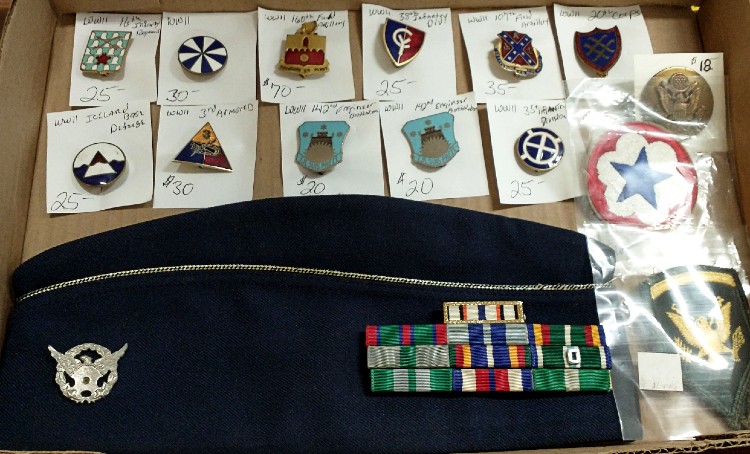 Bahoukas Antique Mall & Beer MuZeum has a military collection worth browsing. This recent collection includes a variety of DUI – Distinctive Unit Insignias including many from WWII, a Coast Guard Cap, Awards Ribbons, A Unit Patch (we have many more), a Cap Badge, and a Spec 5 Patch.

A distinctive unit insignia (DUI) is a metal heraldic device worn by soldiers in the United States Army. The DUI design is derived from the coat of arms authorized for a unit. DUIs may also be called “distinctive insignia” (DI), a “crest” or a “unit crest” by soldiers or collectors. The term “crest” however, in addition to being incorrect, may be misleading, as a DUI is an insignia in its own right rather than a heraldic crest. The term “crest” properly refers to the portion of an achievement of arms which stands atop the helmet over the shield of arms. (Nevertheless, a minority of DUIs happen to depict crests, such as those of many National Guard state area commands.) The U.S. Army Institute of Heraldry is responsible for the design, development and authorization of all DUIs.

Here’s a link to our Military Posts.

MILITARY LINK – Some of these items may no longer be available, but you’ll get a pretty good idea of the variety of Military Collectibles that we have. And we’re always receiving more.

Stop in over Havre de Grace’s Independence Weekend Celebrations and browse the shop. We’ll be watchin’ for ya. And just so you don’t miss out on anything, here’s the schedule of events!