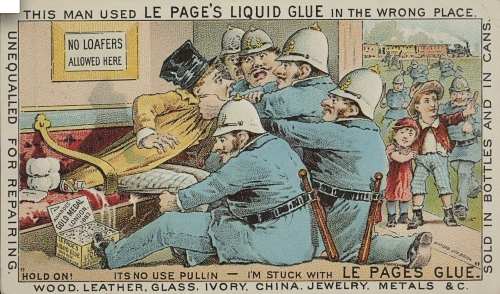 Do you remember using this glue in school?

Did you know the first glues created by chemist William Nelson LePage were formed from fish skins. The above LePage’s became a household name throughout North America. Between 1880 and 1887, LePage’s sold 50 million – 50 MILLION – bottles of glue worldwide!

This information is from the book, fascinating canada, a book of questions and answers, by John Robert Colombo, 2011.

Seventy years ago Le Page was born in Prince Edward Island. His mother was a great-granddaughter of that Thomas Spratt, who was Bishop of Rochester and Dean of Westminster. As a boy Le Page crossed to the United States, became a chemist, settled in Gloucester, Mass., and there established a factory for utilizing the by-products of fish.

In time he placed upon the market mucilage and glue which bore his name. He became wealthy and in the pages of Harper’s Magazine and in other popular journals of the seventies he initiated advertising campaigns which startled the American public. He is said to have spent a fortune in advertising his product. He was among the forerunners of the great national advertisers of the present time. His success with such an ordinary product as mucilage and glue having inspired other manufacturers of that period to successfully try out the mysterious powers of printers’ ink in marketing their products.

from The Cake Lady

Visit us at Bahoukas Antique Mall and Beer MuZeum for a store full of memories. We’ll be watchin’ for ya!