Amusement games often used ‘tokens.’ With the wonderful Havre de Grace history items we have on display, you can view some of the games from the Hatem Store that would have used tokens.

You probably can guess what animal was first used on circulating coins: NOOOOOOOoooooooo – not the BUFFALO!!! The EAGLE was first.

But do you know who has been recorded as having the first coin collection?

The earliest recorded coin collection belonged to the first emperor of Rome, Augustus Caesar. He lived from 63 B.C. to A.D. 14. That is over 2,000 years ago!

The above info is from the U.S. Mint Site

Of course, if it’s a regular coin collection as in legal tender, you would be a numismatic!

In either case, stop in and visit us at Bahoukas Antique Mall. We have a great assortment of coins AND tokens.

And as always, we’ll be watchin’ for ya!

Maybe – You’ll have to ask a numismatic!

If you’re a coin collector, ie numismatic, the right nickel could be worth in the $100,000 range. Of course, you’ll probably not find one in your pocket! Click here to read the story of 15 of the most valuable nickels. One was actually sold for over $3 million! Alrighty now! Want to learn the difference between Proof sets, Mint Sets, and Uncirculated Sets? Click here for a great site for beginner collectors.

Does that help explain the intrigue of coin collecting? Maybe the following article will help if you’re thinking about it and haven’t started yet. It’s from  U.S. Mint website: 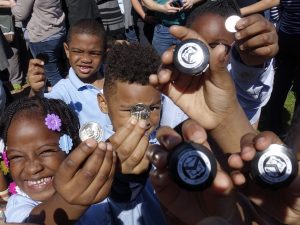 Coins in your pocket, coins at the store, coins under couch cushions, there’s always more! It seems like coins are everywhere. Why in the world would anyone collect them?

There are plenty of reasons to collect coins! Here are some of them:

Whether you have a lot of money to spend on coin collecting or none at all, it’s an interesting hobby for everyone. Here are some other reasons to collect coins:

Numismatics is the study and collecting of things that are used as money, including coins, tokens, paper bills, and medals. A person who collects coins is called a numismatist.

Interested in collecting coins or want to meet your fellow numismatists? Visit the American Numismatic Association website to learn more.

When you’re ready to get started, stop by and visit. We’ll help. And yes, we’ll be watchin’ for ya!