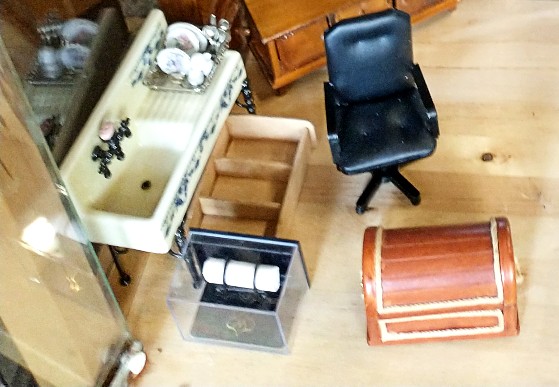 Bahoukas Antiques continually delights our shoppers of all ages. Check out these amazing wooden doll house furnishings. You have to see them to appreciate them.

Did you know originally dollhouses were for adults?

Before they were toys, <they> were used to show off wealth and teach domestic roles.

from The Atlantic magazine

TRIVIA QUESTION: Do you know names used for the early dollhouses of the 17th century?
(answer at end of article)

In 1962 the Louis Marx Toy Company introduced another line of miniature hand-painted figures based on characters made popular by nursery rhymes and fairytales, such as those by the Brothers Grimm. The 35 cute but generic Fairykins figures are often confused with Disneykins. They were packaged and sold in basically the same formats as Disneykins and were also miniature remakes of popular 1950s figures.

Here at Bahoukas we love our young shoppers. So you can be sure, we’ll be watchin’ for ya!